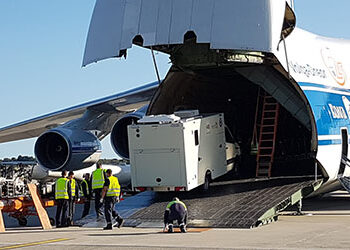 The containers are being transported from Grenoble to the Lyon-Saint Exupery airport and loaded onto a large cargo aircraft during the afternoon of October 8.

An Antonov airplane hired specially by the Mérieux Foundation will take off from the Lyon-Saint Exupery airport (France) on Wednesday October 9. Three container laboratories have been loaded onto the aircraft to bolster efforts to control the Ebola virus disease epidemic. Their final destination is Goma, Democratic Republic of the Congo.

On July 19, Alain Mérieux received an alert from Professor Jean-Jacques Muyembe, appointed by the President of the Democratic Republic of the Congo to coordinate the national response to the Ebola epidemic. Professor Muyembe described the emergency situation his country faced. He was particularly insistent about the crucial need for a laboratory to improve diagnostic capacities in Goma, the country’s third largest city, located in the region bordering Uganda and Rwanda.

Race against the clock

By the end of July, the Mérieux Foundation had decided to do everything in its power to respond to this emergency. Its own teams and the teams at IMeBIO got to work and two months later, three containers were ready to be shipped.

These “plug & play” container laboratories, manufactured by the Grenoble-based company IMeBIO, are particularly well-adapted to complex, challenging situations on the ground. They are equipped with advanced technologies that comply with the most stringent international quality, biosafety and biosecurity standards. This equipment is essential to perform reliable and rapid diagnostic tests and to ensure biological monitoring of patients. In epidemic situations, access to diagnostics is critical to identify individuals who have been infected and direct them to treatment centers, which helps to control the epidemic.

The containers are being transported from Grenoble to the Lyon-Saint Exupery airport and loaded onto a large cargo aircraft during the afternoon of October 8. In the early hours of October 9, the Antonov airplane will take off for Kigali, Rwanda, where the containers will be unloaded and transported by truck to Goma, in the Democratic Republic of the Congo.

A secure site is essential to install the laboratories. Once they have been set up, the necessary equipment and lab consumables will be sent in the days that follow. The container laboratories will be delivered and donated to the National Institute for Biomedical Research in the Democratic Republic of the Congo, directed by Professor Muyembe, and his teams will operate the units. In addition to serving in the short term to respond to the Ebola epidemic, in the long term they will help strengthen the country’s diagnostic and surveillance capacities, and can be used during outbreaks of other infectious diseases.

A separate mobile laboratory is also being loaded onto the airplane on October 8, as part of a pan-European partnership between the Mérieux Foundation and the Praesens Foundation, in conjunction with Africa CDC (Africa Centres for Disease Control and Prevention). This private Belgian foundation’s truck-based mobile laboratory will complement the container laboratories, making it possible to travel into remote, difficult-to-reach areas to collect samples and perform preliminary screening tests.

In addition to the remarkable efforts by teams from the Mérieux Foundation and IMeBIO, both in France, and in the Democratic Republic of the Congo, this operation – which represents a total budget of €2 million – also received logistics support from Bioport and the Lyon Airport, which have extensive experience in transport for humanitarian actions.

“This operation makes me feel especially gratified and proud. Working with our partners, we were able to win this race against the clock. Our foundation has upheld its commitment to fighting infectious diseases that strike the poorest regions of the globe – a commitment that we translate into action on the ground, with our local partners and friends,” said Alain Mérieux, President of the Mérieux Foundation. “As the Global Fund’s Replenishment Conference is about to open tomorrow in Lyon, this initiative is emblematic of the new international partnerships that are absolutely necessary to combat infectious diseases, in particular during epidemics, when time is of the essence, in an approach that must be planetary and long term. I would like to pay tribute to the responsiveness and commitment of the teams of all our partners, especially the company, IMeBIO, and the Bioport association,” he added.

Professor Muyembe, Director of the National Institute of Biomedical Research in the DRC, stated: “The donation of modern laboratories to Goma by the Mérieux Foundation comes just at the right time to help stop this epidemic and strengthen the health system in the eastern provinces of the Democratic Republic of the Congo.”

Jean-François Jung, Chief Executive Officer of IMeBIO added, “The challenge entrusted to us by the Mérieux Foundation, highlighted the importance of making laboratory solutions available that can be adapted and deployed in container form anywhere in the world to effectively protect medical teams fighting infectious diseases in emergency situations. The level of this health emergency has mobilized all our teams and partners to make the laboratories available as quickly as possible.”

Dr. Rudi Pauwels, Founder and President of the Praesens Foundation, stated: “We are proud and grateful for our partnership with the Mérieux Foundation in this project to strengthen local capacities in the Democratic Republic of the Congo, and hope that this marks the beginning of a lasting alliance. Common values, complementary skills and concern for vulnerable populations unite us in this fight against infectious diseases that calls for a participatory approach.”

“After the Ebola operation in 2014, Bioport’s teams are making all their expertise available to the Mérieux Foundation and its partners to successfully deliver this long-awaited laboratory to the field to provide quality diagnosis under the best conditions,” declared Benoit Miribel, President of Bioport.

Tanguy Bertolus, Chairman of the Lyon Airports Management Board
stated: “VINCI Airports’ teams in Lyon are proud to be associated with this exceptional initiative alongside the Mérieux Foundation, by mobilizing all the expertise of the operators of Cargoport, the airport’s freight zone. About ten similar flights have already been carried out from our airport. In these exceptional situations, chartered cargo flights are the best solution for transporting freight to its final destination: in addition to the appropriate infrastructure, the responsiveness, availability and expertise of Cargoport-based operators ensure the success of this type of initiative, often conditioned by emergency situations.”

Created in 1967, the Mérieux Foundation is an independent family foundation with public interest status, chaired by Alain Mérieux. Its mission is to contribute to global health by strengthening the local capacities of developing countries to reduce the impact of infectious diseases that affect vulnerable populations, particularly mothers and children. Present in some twenty countries in West Africa, the Indian Ocean, the Caribbean, Latin America, Asia, and the Middle East, the Mérieux Foundation focuses its action on four objectives: increasing access to diagnosis for vulnerable populations, enhancing local applied research capabilities, encouraging knowledge-sharing and improving conditions for mothers and children, taking a global health approach

While providing optimal protection for laboratory staff and the surrounding environment, they meet the need for biological containment labs that are rapidly-deployable, everywhere in the world – especially in countries with outbreaks of virulent strains. Their mobile labs can be set up in a fraction of the time it takes to build a permanent laboratory, meaning that critical R&D work can begin almost immediately.

The Praesens Foundation, a private Belgian foundation established by Dr. Rudi Pauwels, aims to detect and contain current and future health threats around the world by facilitating access to quality diagnostic tools for populations in need, irrespective of their location and resources. It is working in the field to strengthen diagnostic capacities that, by informing medical decisions, make it possible to fight infectious diseases more effectively. In a preventive and curative strategy, the Praesens Foundation has developed and designed an autonomous and connected mobile laboratory that aims to bring the reference laboratory closer to epidemic areas, offering rapid access to molecular diagnostics, even in the most isolated areas, and real-time results, essential for rapid patient care.

Learn more about the Praesens Foundation

Bioport is a dedicated team of people who have experience in humanitarian and international logistics and Lean management.

Bioport has 7,000m² of warehouse space located at Lyon St Exupéry airport and at one of the largest European logistics areas in Saint-Quentin-Fallavier.

Lyon Aéroport is in charge of Lyon–Saint Exupéry, 2nd regional airport in France, and Lyon–Bron, 3rd French airport for business aviation. First airport of the VINCI Airports network in France, with 11 million passengers in 2018, Lyon–Saint Exupéry offers 131 direct destinations, of which 52 new routes launched in the last 3 years, as well as connections to the main international hubs. Lyon-Saint Exupéry is 30 minutes from the city center by the Rhônexpress tramway. Its new infrastructure ensures a quality passenger experience and operational excellence for airlines, both of which have been recognized by the ACI (Airport Council International) award for best European airport in the 10-25 million passenger category. Certified Level 3+ by the ACA (Airport Carbon Accreditation) and ISO 50001 (in 2018/2019), Lyon-Saint Exupéry Airport is growing with complete control over its environmental impact.

VINCI Airports, the number one private airport operator in the world, manages the development and operation of 46 airports in France, Portugal, the UK, Sweden, Serbia, Cambodia, Japan, the US, the Dominican Republic, Costa Rica, Chile and Brazil. The VINCI Airports network handled 240 million passengers in 2018 and is served by more than 250 airlines.

Through its expertise as a comprehensive integrator, VINCI Airports develops, finances, builds and operates airports, leveraging its investment capability, international network and know-how to optimise the management and performance of existing airport infrastructure, facility extensions and new-build construction projects. In 2018, its consolidated revenue amounted to €1.6 billion and its managed revenue amounted to €3.6 billion VINCI Airports manages airports in Lyon since 2016. VINCI Airports manages airports in Lyon since 2016.